Mules. Trains. Handcarts. Rockets. Over the past two centuries since its inception in 1775, the United States Postal Service has experimented with a wide variety of transportation methods to deliver mail to our country’s residential addresses. Some methods stuck around, and others fell by the wayside. We thought it’d be a fun idea to list them all out and talk a little bit about each one. So, voila! Here is every form of transportation USPS has used (and still uses) to deliver mail. Pretty much since the day we were born, we’ve all seen USPS vans making their rounds on the street every day. The red, white, and blue boxy vehicles are as recognizable of a brand as McDonald’s or Coca Cola—everybody knows them. While the delivery vehicles have evolved over the years, USPS has relied on their trusty motor vehicles to deliver mail ever since they first started using them in the early 1900’s. One postal worker named Lloyd Mortice even went so far as to soup up his Model T into a snowmobile in 1926 so he could make his rounds during snowstorms. Talk about a commitment to the job!

Air delivery is one of the most popular forms of transportation that USPS uses, for obvious reasons. When they need to deliver packages quickly, the fastest way to get them around the country is via an airplane. USPS typically uses airplane delivery for express services such as Priority Mail and Priority Mail Express. Transcontinental air service began in the summer of 1924 and has been going strong ever since. Trains were the primary method of transport for long distances before airplanes came into existence, and USPS took full advantage of them. Believe it or not, USPS still uses trains to transport parcels across the country! Trains obviously take longer to reach their destination, but they are a much more cost-effective solution than air travel. In fact, whenever a USPS customer sends a package in the mail class USPS Retail Ground, that package will most likely end up on a train such as Amtrak (unless it doesn’t need to travel a long distance, of course). To this day, the US Postal Service utilizes boats and ships to transport letters and packages both domestically and abroad. This is obvious. However, did you know that USPS relies on water transport to deliver mail to some select parts of the United States? In fact, some of these water delivery methods are pretty niche. For example, one route on Wisconsin’s Geneva Lake features “mail jumping,” in which letter carriers jump from their boat, swap incoming and outgoing mail on the dock, then jump back onto their still-moving boat to hit the next dock! While these water routes are pretty interesting, 99% of them are only seasonal. The only year-long water mail delivery route in the entire United States is in Magnolia Springs, Alabama, which services roughly 180 homes and is 31 miles long. 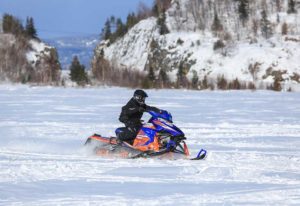 Snowmobiles have been part of the delivery fleet for several decades, and USPS still uses them to deliver mail in states that receive heavy snowfall during the winter, such as Minnesota, Wisconsin, and Alaska. We bet postal workers have a lot of fun tearing it up on their routes after some fresh powder hits the ground…just as long as it’s not so cold outside that USPS has to stop delivery altogether. The USPS highway bus was introduced in the early 1940’s as sort of a “Post Office on wheels.” The 1930’s saw a significant decline in railway traffic, and as a result, the Postal Service created the concept of the highway bus to shoulder some of the burden of long distance letter transportation. It was an impressive feat: these red, white, and blue buses were outfitted with distributing tables, letter cases, and enough space to hold up to 150 mail sacks. However, highway buses eventually fell out of fashion in the 1970’s due to advances in sorting automations and a major restructuring of the entire postal system. In fact, this restructuring led to the high-speed sorting system in centralized locations that USPS still uses to this day. 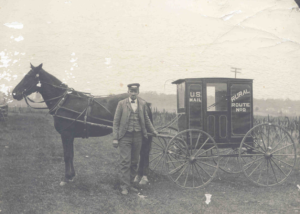 As shown in this article’s main picture, horses and the wagons they pulled behind them were a very popular method of mail delivery in the 1800’s. This wasn’t an all-too-terrible way to deliver mail, as the wagons had plenty of space to hold letters and horses could easily pull them. However, working with a live animal isn’t always the most reliable option, and as soon as operational motor vehicles came around, the horse-and-buggy method was history. Before a shiny, rubber-burning Tesla pops into your head, we’re not talking about the type of electric vehicles that you’re thinking of. USPS actually started using electric-powered vehicles back in the early 1900’s. However, technology during that time wasn’t what it is now, and vehicles weren’t deemed as adequate replacements for horses and sleds during the winter season! We’ve come a long way since then, and USPS is slowly working its way back to its early electric vehicle ambitions. In fact, USPS recently began testing all-electric vans in central California on February 5th. This could be a huge step towards a sustainable future for the US Postal Service, and who knows? Maybe they’ll be at the top of this list if we re-do it someday. Believe it or not, USPS still uses mules to deliver mail to residents of Supai, Arizona! Technology and innovation has brought us planes, trains, and automobiles over the years, and as a result, this once-popular form of mail delivery has nearly been phased out. However, it’s not over until it’s over. The Supai route to the bottom of the Grand Canyon is the last remaining mule route in the entire country. Say what you will and laugh all you want, but the mule system still works like a charm down there for USPS. The Three-Wheeled Mailster was a funny-looking vehicle with a top speed of 35 miles per hour that allowed postal workers to carry up to 500 hundred pounds of mail at one time. That kind of volume of was unprecedented at the time, and USPS rolled the dice on Mailsters in a big way. By 1966, Mailsters comprised well over one-third of USPS’ entire delivery fleet! However, the investment didn’t quite pay off the way the organization hoped. While Postal Service higher-ups were in love with the idea, the actual workers driving these vehicles hated it. Mailsters could be immobilized by as little as a few inches of snow and didn’t provide adequate heating. Also, they could tip over as easily as a college junior after having one too many drinks. Motorcycles may seem like a viable alternative to larger motor vehicles, as we still see them every day. However, motorcycles didn’t work their way into the US Postal Service the same way they did with police forces. In fact, USPS only used the motorcycle on an experimental basis in Washington, D.C. in 1912, and they quickly put a stop to it when winter rolled around. Suffice it to say, it didn’t quite work out the way they had hoped. Motorcycles didn’t have enough storage space to hold mail, and they don’t perform so well on snow and ice. It seems hard to imagine in the age of smartphones, but letter carriers once used to deliver mail on foot using handcarts. Talk about trudging along…we wouldn’t want to walk a mile in their shoes! If faced with the choice, we’d rather just Uber…but unfortunately, postal workers didn’t have that luxury back then. They might have been slow, but handcarts got the job done just fine until more efficient modes of transportation eventually came along. Remember when segways were a thing? Back in the height of their popularity, it wasn’t uncommon to see a postal worker riding around on a segway to complete his or her route like Aladdin on his magic carpet. However, there wasn’t enough storage space on them, navigating sidewalks and curbs was tricky, and tackling a flight of stairs was just not possible. Ultimately, the fad didn’t last long. These days, Bird and Lime scooters are taking the world by storm, and those devices aren’t all that different from segways. Who knows? Maybe we’ll see USPS workers whizzing by on electric scooters to deliver mail one of these days. Apparently the United States Postal Service beat our boy Elon Musk to the punch 60 years ago. Seriously. In the late 1950’s, United States Postmaster General Arthur Summerfield called for a new means of mail delivery to satisfy growing demand across the country. Apparently, the best idea these guys could come up with was mail by missile. On June 8, 1959, the Navy submarine USS Barbero launched a missile containing 300 letters off Florida’s coast in a demonstration that was more of a publicity stunt than anything. The demonstration was a success, and Postmaster Summerfield proudly declared, “We stand on the threshold of Rocket Mail!” Obviously, Rocket Mail never came to fruition…but the fact that it was even a discussion in the first place still blows our minds (pun intended).